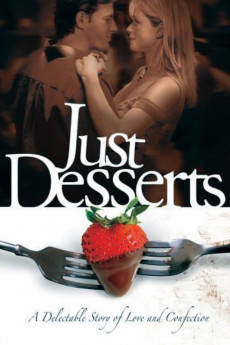 Lauren Holly, Carol Ann Susi, Costas Mandylor, Bruce Thomas
Marco Poloni’s family owns a bakery in the Bronx and it seems that they have fallen on hard times and his family is considering selling the bakery. Marco then decides to enter a baking competition hoping that the money and publicity will help them. But he needs a partner, so he asks Grace Carpenter, the baker of a restaurant, although they started off on the wrong foot, she agrees. So they go to the competition and things seem to be looking good except for a few complications. One of the other contestant Jacques du Jacques is Marco’s former classmate at the Academy, whom he says betrayed him. Emil, one of the judges, is Marco’s former instructor at the Academy whom he did not leave a good impression on. And Marco’s temper, will they be able to pull it off? During this time, Marco also finds himself attracted to her, but she already has a boyfriend.


The Subtitle(s) for Just Desserts (2004) may either be in single Srt format or multi file  compress to Zip / Rar format. Either way, we have provide simple details guide on how to add or use this subtitle file(s) on your Media Player with the movie - Just Desserts (2004).

How To Add Subtitle To Just Desserts (2004) In Media Player

Before you can add Just Desserts (2004) subtitle file file to the movie, you should make sure the exact SRT file for the particular movie format is downloaded from Film2Srt.com .

To download subtitles for Just Desserts (2004), right click on the Black button above with your preferred language. Your subtitle file will begin downloading immediately.

Below are the step-by-step guide to add subtitles for Just Desserts (2004) file on your movie player.